We’re hoping that this series on linear regression will help if:

Whichever is the case we’ll be explaining the techniques, what they do, how to use them and how to analyse their outputs. We’ll also give code examples in R (We’ll cover R in more detail in a future post).

We will try to explain what’s happening with words and pictures as far as it’s practical, however, a bit of maths is unavoidable.

We are going to assume around about high school level maths, basic calculus, linear algebra and probability, but otherwise try to build things up from first principles.

What is Linear Regression and why is it important?

Regression covers a broad range of techniques where we estimate to what extent a variable of interest, often called the dependent or responding variable, can be predicted by a number of known variables, often called the manipulated or independent variables. While there are many regression techniques available to the Analyst, covering a variety of different situations, they are all extensions of the simple linear regression technique covered here.

Let’s start with a simple (and almost canonical) example. We have the test scores of 40 students.

A typical use of simple linear regression centres around the question: “How do I grade a student that has missed this test due to absence, what score should they be assigned?”.

If the only information we have are the other students’ test scores then the best we can do is give the student the average or mean score:

There is a valid criticism to this approach: If the sick student was a star student then shouldn’t they receive an above average mark for the test? Likewise, should a normally below average student receive the average?

What if, in addition to the latest test scores above, we had scores for each student’s previous test?

If we look at figure 1, illustrating the old and new test scores of the original 40 students, then we can see there is clearly a relationship between students’ scores on the two tests (students who did well on the last test tend to perform well on the next test).

Figure 1 – Old and new scores for each student

If the sick student scored 25 on the old test then a score of 80 seems reasonable (gold line), likewise a score of 15 on the fist test might correspond to a approximately 60 on the new test.

and labelling our older scores

we calculate our means,

Next we calculate the standard deviation.

We have for the old tests

and for the new

. In later post we’ll dig a little more into standard deviations and the insight they provide about how our data is distributed (under certain conditions), for now we’ll take this as a measure of how spread out out our data is. Next we calculate

scores for each of our test scores (old and new with

score tells us how far a score is from the average score, in a way that doesn’t depend on average or spread of scores (it is simple to show that the average of the

scores is always 0 and the standard deviation is always 1).

The advantage of this is that we can now compare scores from the old and new tests on the same footing. Lets plot our

scores for the two tests, in fig 2 we see that the two sets of

. We could do this by having a linear relationship between the two

scores that was a good ”representative” of the data – unfortunately the blue and gold lines both seem like they could be the ”best” fit.

To make this precise we will define the ”best line” as the one that minimises the square of the distances between the points and our line (see fig. 3)

We want to find the line

will be our estimate for

) that minimises the square distance between

Figure 3 – Z scores with errors (dotted blue lines), the “best” line will be the one where the sum of the squared distances is minimised

To minimise we want both our derivatives:

Where we have made use of the fact that

. The derivative with respect to

We now look at the numerator and the denominator separately.

has a special name we call it the “Pearson correlation coefficient“, it is usually denoted

(and sometimes called Pearson’s r or simply the correlation coefficient). To understand what it tells us and why it is useful lets transform back to

(our test scores from earlier). 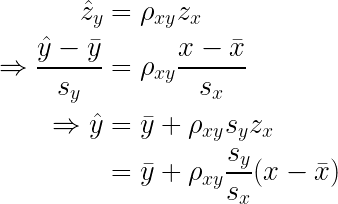 What does this mean?

This equation gives us a procedure for estimating

multiply the result by

and add the result to the mean value of

In order to really understand this lets look look at two extreme cases:

In the first lets assume that

, for this to happen for each pair

there is a nearby pair

(i.e. the bets guess we could make when we didn’t have the older test scores).

In the second extreme case imagine that the second test could be perfectly calculated from the first with a linear relationship, 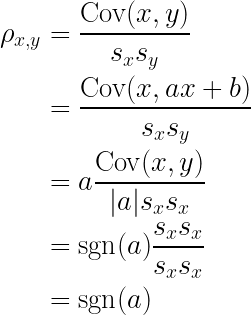 is negative and 0 if

is zero. In this case our procedure for estimating a new

score we work out how many standard deviations it is from

as being the same number of standard deviations from

gives a balance of the two approaches, or how far we should regress back towards using a mean value for our estimate.

So … what score does the student get?

For the set of values above we get

which indicates that there is a strong (but not perfect) positive relationship. If our sick student hypothetically score 15 on the old test then following our estimation procedure gives us

, similarly an old test score of 25 gives and estimate

(both of which are pretty close to our “eye ball” estimates).

So now we have a method for deciding whether there is strong linear relationship between two variables, and a procedure for estimating a responding variable (like our test score) based on an independent variable (our old test scores).

What we haven’t talked about yet is errors, which we’ll leave for another post. In particular to really understand regression and hence know when you can and can’t use this technique we’ll need to cover:

Once we have covered these we’ll have our first tool under our belt. Finally it’s worth noting that simple linear regression has a number of real world applications and we’ll talk about some of these in future posts.

More from the blog

The aim of this blog post is to introduce the concept of agent-based modelling and hopefully excite you with the...

In this introduction to analytics series of posts we’ll be introducing some of the common, every day techniques that Data...

The 4CDA team are big fans of open source object-relational database management system PostgreSQL when it comes to data analytics...
We use cookies on our website to give you the most relevant experience by remembering your preferences and repeat visits. By clicking “Accept”, you consent to the use of all the cookies. Read More.
Do not sell my personal information
Cookie SettingsReject AllAccept
Manage consent

This website uses cookies to improve your experience while you navigate through the website. Out of these, the cookies that are categorized as necessary are stored on your browser as they are essential for the working of basic functionalities of the website. We also use third-party cookies that help us analyze and understand how you use this website. These cookies will be stored in your browser only with your consent. You also have the option to opt-out of these cookies. But opting out of some of these cookies may affect your browsing experience.
Necessary Always Enabled
Necessary cookies are absolutely essential for the website to function properly. These cookies ensure basic functionalities and security features of the website, anonymously.
Functional
Functional cookies help to perform certain functionalities like sharing the content of the website on social media platforms, collect feedbacks, and other third-party features.
Performance
Performance cookies are used to understand and analyze the key performance indexes of the website which helps in delivering a better user experience for the visitors.
Analytics
Analytical cookies are used to understand how visitors interact with the website. These cookies help provide information on metrics the number of visitors, bounce rate, traffic source, etc.
Advertisement
Advertisement cookies are used to provide visitors with relevant ads and marketing campaigns. These cookies track visitors across websites and collect information to provide customized ads.
Others
Other uncategorized cookies are those that are being analyzed and have not been classified into a category as yet.
SAVE & ACCEPT